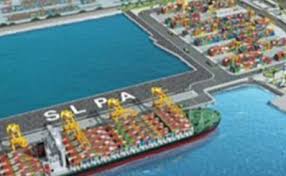 With a 51 percent equity stake, India’s Adani Ports and Special Economic Zones Ltd. (APSEZ) is partnering with John Keells Holdings PLC (JKH) and with the Sri Lanka Ports Authority (SLPA) to develop and operate the proposed West Container Terminal (WCT) at Port of Colombo on a Build, Operate and Transfer basis for a period of 35 years as a public-private partnership, Adani Ports announced.

“India’s largest private Ports & Logistics company and a key subsidiary of the diversified Adani Group, received a Letter of Intent (LOI) from the Ministry of Ports and Shipping of Sri Lanka and the Sri Lanka Ports Authority, acting on behalf of the Government of Sri Lanka, pursuant to approval from the Sri Lankan Cabinet of Ministers for the development and operations of West Container Terminal (WCT) in Colombo, Sri Lanka,” it said.

Adani Ports will hold 51% in the terminal partnership and WCT will be developed to reach a capacity of 3.5 million TEUs, according to the media release.

JKH, Deputy Chairman/Group Finance Director, Gihan Cooray expects a concession agreement to be executed in due course, where JKH would have a material equity stake.

Adani Ports noted that WCT will have a quay length of 1400 meters and alongside a depth of 20 meters, thereby making it a prime transshipment cargo destination to handle Ultra Large Container Carriers.

“The Colombo Port is already the most preferred regional hub for transshipment of Indian containers and mainline ship operators with 45% of Colombo’s transshipment volumes either originating from or destined to an Adani port terminal in India,” it stated.

The Port Operator was earlier proposed to develop the East Container Terminal (ECT) at Colombo Port by the Indian government, under a tr-party agreement signed between Sri Lanka, India, and Japan to develop and operate.

However, the Sri Lankan government scrapped the agreement amidst opposition trade unions in Colombo Port, instead of India and Japan was offered WCT. Both countries yet to accept the offer made by the Sri Lankan Government.

“the network impact of this partnership is significant and expected to be mutually benefitted from the string of 7 container terminals across its 12 ports that Adani operates along the Indian coastline handling an annual volume of over 6 million TEUs. This partnership will multiply and accelerate the transshipment options that will become available to serve various shipping lines and other potential port customers across the South Asian waters, benefiting both, India and Sri Lanka in multiple ways,” Adani said.