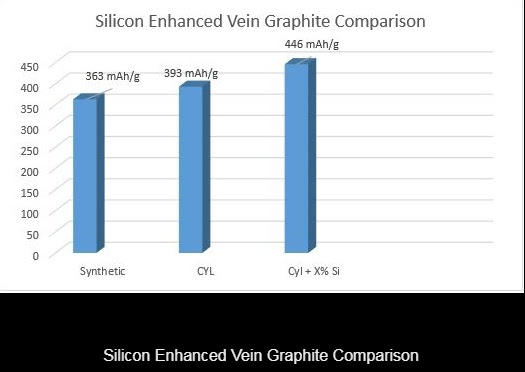 Ceylon Graphite Corp. (“Ceylon Graphite”) announced that it has achieved a significant breakthrough in the performance of its silicon enhanced vein graphite anode material for the lithium-ion (“Li-ion”) battery market. In tests at a leading global, independent facility, Warwick University, performance of Ceylon’s vein graphite anode material was further improved by its core-shell silicon additive.

This is the first time in battery research history that commercial spherodized, silicon enhanced vein graphite materials were tested in a lithium-ion battery in a half cell.

Results came in at 446 mAh/g for specific discharge capacity (SDC) for silicon enhanced vein graphite materials, which is 13% higher than what is achieved for vein graphite on its own (393 mAh/g, another impressive result) under the same testing conditions. The synthetic comparison data is from earlier test work performed at WMG.

“We had very good results from our initial coin cell battery tests as well as our full cell test, but I am excited to see the performance improvement of vein graphite with silicon enhancements. These results are a highly significant development for Ceylon, and we believe we can further improve these numbers as we continue perfecting the technology. The unique characteristics of our Sri Lankan vein graphite combined with our proprietary processing technologies produces a Li-ion battery with significantly higher power and energy as tested by WMG. In addition, we believe that the energy consumption of the end-to-end process of producing battery grade anode material from vein graphite is the lowest, relative to synthetic and flake graphite, because vein graphite from Sri Lanka does not require primary processing, due to the high in situ grade above 90%Cg.” Ceylon CEO Don Baxter stated.

Ceylon also announced it has granted an aggregate of 4 million stock options to its directors, and Officers. Each option is exercisable at 20 cents per common share at any time until January 26, 2027.