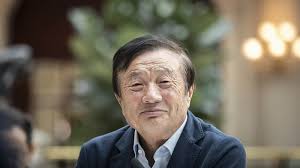 (Reuters) – The United States remains a “beacon of technology” to be emulated and China’s Huawei Technology should consider cutting products in the wake of U.S. actions against it, the Chinese firm’s founder Ren Zhengfei said in remarks made public on Friday.

Ren’s comments, in a letter to staff dated June of last year, were shared for the first time on a company message board, making them the first public word from the company since Joe Biden took over the presidency from Donald Trump.

Huawei has remained largely silent about its prospects under the Biden administration, after being targeted with several rounds of sanctions under Trump, who said Huawei’s equipment poses a security risk. The company denies the charge.

In a parting shot on Monday, the Commerce Department told semiconductor makers it would deny or revoke licenses for companies including chipmaker Intel Corp to sell products to Huawei, people familiar with the matter told Reuters..

Ren’s letter said that U.S. actions had left Huawei “with a great mismatch between our strategy and our abilities, and that the company will have to revaluate some product lines, and consider cutting some products and staff that are unproductive.

The letter was posted publicly after former Huawei subbrand Honor announced new supply partnerships with major chip companies including Intel and Qualcomm that it had previously lost access to due to the U.S. action against the parent.

Huawei sold Honor to a consortium of the latter’s agents and dealers in November in a bid to help it regain access to chips.

Ren’s letter also said that while the company will keep its pay structure unchanged over the next three to five years, hundreds of senior ‘cadres’ had voluntarily taken demotions.

The letter did not mention the Biden administration specifically, though analysts have said the company will need a reprieve from Washington to revive its hobbled phone and 5G infrastructure businesses.

“The United States is still the world’s beacon of technology, and we must learn everything we can from advanced people,” Ren said.