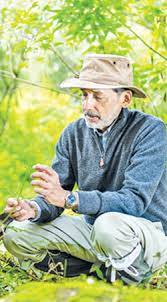 Linnean Society of London has awarded veteran naturalist and zoologist Dr.Rohan Pethiyagoda with its prestigious Linnean Medal of zoology for the critical played by him in the understanding and conservation of the astonishing freshwater fish diversity of Sri Lanka and the region more broadly.

Every year, the Linnean Society of London awards a number of medals and awards to celebrate excellence in science, from botany to zoology, to honor those blazing a trail in microscopy, and recognizing the contributions of amateur naturalists to the wider biological sciences.

Dr. Pethiyagoda has been an employee of and advisor to the government of Sri Lanka, serving as Chairman of the Water Board in the 1980s. His 1991 monumental Freshwater Fishes of Sri Lanka was hailed as a landmark achievement, treating the island’s diverse ichthyofauna more comprehensively and authoritatively than ever before.

Over the next decade both Dr. Pethiyagoda and his Wildlife Heritage Trust (WHT), set up with the profits from the book, became synonymous with the exploration, discovery and documentation of Sri Lanka’s biodiversity and the wider application of this to enhance biogeography of the broader region. His program of original and collaborative research (both Sri Lankan and overseas) has resulted in publications on many zoological groups in addition to fishes. His impact on biodiversity research in Sri Lanka and beyond through his output and catalytic influence cannot be overestimated.

“Emerging from the pandemic, we have seen how much nature means to our own health, both mental and physical. Understanding, valuing and protecting the natural world is integral to the health of both the planet and ourselves. Our winners have all shown inspirational ways forward,” President of the Linnean Society, Dr. Sandra Knapp said.

All medals and awards are scheduled to be officially presented at the Society’s AGM/Anniversary Meeting in May.