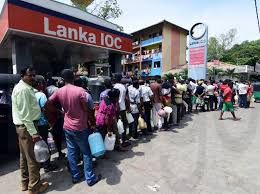 (Reuters) – Sri Lanka increased fuel prices on Tuesday, a long-flagged move to mend public finances and combat its debilitating economic crisis, but the hikes are bound to add to galloping inflation at least in the short term.

Power and Energy Minister Kanchana Wijesekera said in a message on Twitter that petrol prices would increase by 20-24% while diesel prices would rise by 35-38% with immediate effect. Daily limits on how much each consumer can purchase will continue.

“The government will hold talks with transport sector stakeholders to increase costs parallel to the latest increases,” he later said in an online cabinet briefing.

Fuel and transport price increases will inevitably flow through to food and other goods, economists said.

Annual inflation in the island nation rose to a record 33.8% in April compared with 21.5% in March, according to government data released on Monday.

“Not only the petrol problem – consumer prices, everything is very high, food is also very high,” said businessman Mohammad Irfan, waiting in a queue at a gas pump in the capital, Colombo. He said he had been there for four hours.

“It is very difficult for the poor people, middle class people. They are facing problems day by day.”

Sri Lanka is in the throes of its worst economic crisis since independence in 1948, as a dire shortage of foreign exchange has stalled imports and left the country short of fuel and medicines, and struggling with rolling power cuts.

The financial trouble has come from the confluence of the COVID-19 pandemic battering the tourism-reliant economy, rising oil prices, and populist tax cuts by the government of President Gotabaya Rajapaksa and his brother, Mahinda, who resigned as prime minister this month.

Wijesekera said people would be encouraged to work from home “to minimise the use of fuel and to manage the energy crisis”, and that public sector officials would work from their offices only when instructed by the head of their institutions.

However, hybrid working models have led to increases in power consumption in other countries, including in neighbouring India. read more

Economists have said fuel and power price hikes would be necessary to plug a massive gap in Sri Lanka’s government revenues, but agreed that it would lead to short-term pain.

Dhananath Fernando, an analyst for Colombo-based think tank Advocata Institute, said prices of petrol have soared 259% since October last year and diesel by 231%. Prices of food and other essential goods have surged, he said.

“Poor people will be the most effected by this. The solution is to establish a cash transfer system to support the poor and increase efficiency as much as possible.”

Prime Minister Ranil Wickremesinghe, appointed in place of Mahinda Rajapaksa earlier this month after violence broke out when government supporters attacked protesters, said last week: “In the short term we will have to face an even more difficult time period. There is a possibility that inflation will increase further.”

There were no immediate reports of protests or unrest after the price increases on Tuesday.

The Sri Lankan Navy said on Tuesday it had apprehended 67 people attempting to illegally flee the country from the northeastern coast.