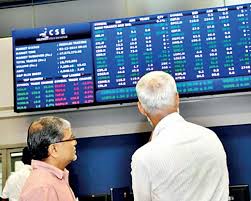 Sri Lanka shares had their worst weekly fall ever on Friday, having extended losses to a fifth straight session, with the Colombo Stock Exchange halting trade for a third consecutive day as the country’s economic crisis deepens.

In the previous session, it clocked its worst quarterly performance since the quarter-ending December 2008, tumbling 27.2%.

The country’s foreign exchange reserves have fallen 70% in the past two years to about $2.31 billion, with the nation struggling to pay for essential imports, including food and fuel.

The island-nation of 22 million people is grappling with rolling power cuts of up to 13 hours a day as the government is unable to make payments for fuel imports due to lack of foreign exchange.

Heavyweights Lanka Orix Leasing Company Plc and Expolanka Holdings Plc were the top drags on the index, losing 20% and 12.9%, respectively.