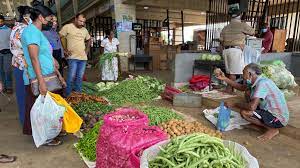 The latest report by World Food Program (WFP) warns that overall acute food insecurity continues to remain a concern as the majority of people are still forced to cut meals while using saving or debt to keep food on the table.

In August, acute food insecurity fell to 37 percent of the population from 49 percent in June.

While food consumption and diets in August, mostly reverted back to June levels, reliance on coping strategies increased and remained at concerning levels.

“The high reliance on coping strategies is a key reason for the persistence of high food insecurity,” WFP said.

The improvement in food consumption is the main driver for the easing of overall food insecurity figures
from July to August. Improvements in the consumption of several food groups were responsible for this change, including vegetables, fat, pulses, and animal proteins.

In July, the number of people with insufficient food consumption was especially high (at 53 percent). This
increase in July coincided with rapid food inflation and the consequences on the ability of households to
purchase these food items. In particular, there was a decline in the consumption of animal proteins and vegetables in July. While this has since reverted to June levels, it remains high for Sri Lanka.

In August, 46% of people borrowed money from a bank/lender (or pawned goods) while
37% of people had to reduce spending on education and health, and 38% of people spent savings and/or skipped debt payment

“This suggests that people continue turning to drastic measures in their efforts to keep food on the table,” WFP said.

In the face of inaction, WFP warned that the situation could deteriorate even further. In particular, the upcoming months could see a combination of factors continue to exert pressure on food insecurity, including poor harvest forecasts of staple foods, import restrictions, and the ongoing
economic crisis.