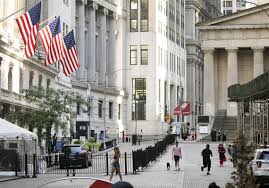 (Reuters) – Wall Street hit record levels on Thursday as market participants bet on more pandemic aid under a Democrat-controlled U.S. Congress to help the economy ride out a steep downturn.

Economy-linked financials jumped 2.2% while industrial and materials sectors hovered near record highs on expectations that President-elect Joe Biden would line up a bigger fiscal package and boost infrastructure spending.

“You’re seeing a reflation trade on the assumption that a more progressive and aggressive fiscal stimulus package could be in the offing,” said Keith Buchanan, portfolio manager at GlobAlt in Atlanta.

The S&P 500 technology, up 2.2%, was set to more than make up for its losses from a day earlier when shares of some of the biggest technology companies dropped on fears of increased regulation.

The NYSE FANG+TM index, which includes the core FAANG group of stocks, gained about 2%.

The Congress on Thursday certified Biden’s election victory, hours after hundreds of President Donald Trump’s supporters stormed the U.S. Capitol in a harrowing assault on American democracy that briefly weighed on markets.

The number of Americans filing for jobless benefits unexpectedly dipped last week, while staying extremely high, a Labor Department report showed, with the job market recovery appearing to stall as COVID-19 threatens to overwhelm the country.

Investors are now awaiting a comprehensive December jobs report, which is expected on Friday.

DXC Technology jumped 10.8% as France’s IT consulting group Atos made a more than $10 billion takeover approach for its U.S. rival, according to two sources with knowledge of the matter.