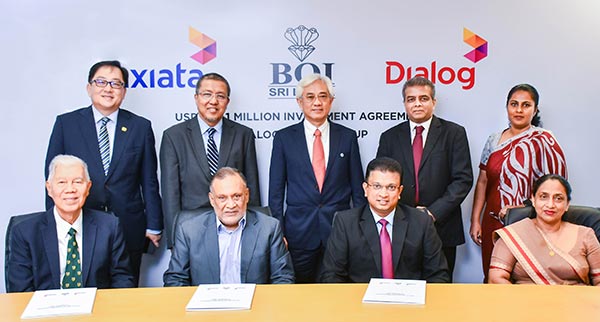 Dialog Axiata Group, the largest Foreign Direct Investor (FDI) operating under the aegis of the Board of Investment of Sri Lanka (BOI), announced the entering into of two supplementary agreements with the BOI for the investment of an additional sum of USD 254.1Mn (LKR 46.1Bn) in Sri Lanka’s ICT Infrastructure on Friday 14 February 2020.

The investment comprises of USD 190.7Mn from Dialog Axiata PLC and USD 63.4Mn from its subsidiary Dialog Broadband Networks (Private) Limited. These agreements span a broad scope of ICT infrastructure development by the Dialog Axiata Group encompassing the expansions of mobile and fixed 4G-LTE networks, the evolution of IP and fibre networks, and the further development of the Group’s Wi-Fi and broadband networks. Moreover, the investment is set to yield significant benefits to the economy through the deployment of 5G connectivity, which will position Sri Lanka as a pioneer in 5G technology. This will be alongside the submarine cable and landing station development which will offer more reliable and cost-effective internet connectivity.

Dialog Axiata Group is a subsidiary group of companies of Axiata Group Berhad, Asia’s second largest Telco with operations spanning across 8 countries including Malaysia, Indonesia, Bangladesh, Cambodia, Sri Lanka, Singapore and India, and Axiata has been a committed and long-term investor in Sri Lanka since 1994.

As the largest FDI in Sri Lanka, Dialog Axiata Group has contributed USD 2.7Bn (LKR 320Bn) to Sri Lanka since 1994, with its investment being 11% of the total FDI of the country. In this regard, it has been recognized by BOI as the first company to invest USD 1Bn in the country.

“We value our partnership with the Board of Investments and are honoured to enter into this agreement today. Having been here since 1994 as the largest FDI, this fresh investment signals Axiata’s long-term commitment to the country and the people. Furthermore, Axiata together with Dialog are excited to deliver better connectivity and new technologies in Sri Lanka,” said Tan Sri Jamaludin Ibrahim, Managing Director/President & Group Chief Executive Officer, Axiata Group Berhad.

“The local telecom sector has seen remarkable growth, keeping Sri Lanka abreast with, and often ahead of the region. Dialog Axiata has been a key driver of this growth as the largest Foreign Investor in the country, and we are pleased to see the company undertake yet another expansion which promises advancement in technology and infrastructure,” said Susantha Ratnayake, Chairman, Board of Investment of Sri Lanka.