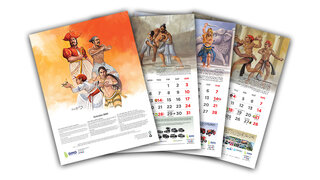 DIMO, one of Sri Lanka’s leading conglomerates, has featured the long-established warrior tradition of Sri Lanka known as “Angampora”, an indigenous and endemic, self-defence art that flourished between 16th and 18th centuries, through the company’s wall calendar for year 2021 as a tribute to the warriors who contributed towards this glorious art before the British suppressed it. It is the 10th calendar produced by DIMO featuring a significant historical element of Sri Lanka.

DIMO is renowned for its continued focus on Sri Lanka’s rich traditions and vibrant history that spans over 2,500 years. The company’s approach has been to shine the spotlight on Sri Lanka’s history at every possible opportunity thereby generating curiosity and interest among the society, educating them and encouraging them to preserve such knowledge and traditions by passing them on to the next generation.

Leafing through the calendar, the reader would be taken on a fascinating journey into Sri Lanka’s history. They are able to witness gladiatorial contests, examples of Sri Lankan warrior armour, early Sri Lanka warriors of the Anuradhapura kingdom, the spiritual training of the warrior through meditation and the story of a queen named Sri Megha Rathnapali. The calendar also shows how the art of Angam is closely linked to the highly developed science of ‘Nila Shasthra’. An example of the skill of the swordsperson trained in Illangam fighting is also depicted along with information on the arms used by elite combat Angam units like the Atapattuwa (King’s bodyguard). Other insightful depictions include the ‘Illangama’, where the training of warriors and martial artists was carried out, how Angam and gladiatorial sports have been performed in religious settings and how they were used as an offering to ensure victory in battle while the use of ‘Maya Angum’ or magic in war is also portrayed.

Expressing his opinion on the calendar, DIMO Chairman & Managing Director Ranjith Pandithage stated, “DIMO has always strongly believed in being a conserving influencer of Sri Lanka’s rich heritage and culture for the next generation. Angampora, a sophisticated ancient discipline is a long-established warrior tradition of Sri Lanka threading through millennia of history. At present, Angampora is reviving as a spiritual combat technique. We are certain that our wall calendar will be an ideal platform to educate communities on this indigenous and endemic philosophy while ensuring this legendary art will live for generations.”

The extraordinary illustrations in the calendar were created by Prasanna Weerakkody who is recognised as one of the leading Sri Lankan artists specialising in reconstructions of Sri Lankan history and ancient lifestyles. As he is well-known as an ardent student of the island’s history, his work is widely-accepted as highly-accurate depictions of early Sri Lankan lifestyles. A primary theme across his work is his special interest in the recreation of early Sri Lankan warriors, fighting arts and warfare that vividly depict the changes in attire, arms and armour and their evolution through centuries.

The DIMO calendar’s creative concept was presented by Sarva Integrated while printing was carried out by Neptune Printers. Sarva Integrated’s Creative and Client Servicing teams conceptualised the use of high quality illustrations that brought to life the descriptive narration on each month of the calendar. The valuable contributions from various individuals from different areas of expertise helped elevate the calendar, making it a knowledge enhancing creation that will resonate well with the general public. In addition, the calendar has also put forward another unique aspect in the form of the eco-friendly printing and presentation. It was produced on FSC (Forest Stewardship Council) certified art board/paper using inks and water-based coatings produced with environmentally safe raw materials free of toxic heavy metals such as lead, cadmium, mercury and chromium.