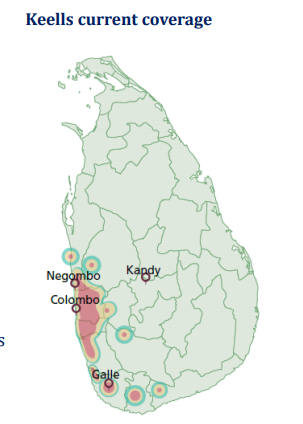 “The Retail sector has seen intensifying pressure from new domestic and international entrants who have sought to leverage on their international insights to offer differentiated product propositions and customer experiences,” the company ackowledged.

Earlier, the diversified conglomerate was targeting to increase the number of Keells branded outlets to 200- 225 within FY2022/23 financial year. It is now expecting to have 200 outlets within FY2023/24, increasing its current store footprint of 123 outlets.

In last FY, JKH managed to open five new Keells outlets in growing suburbs in Western Province and one in Ambalangoda, while closing down its outlet in Kotikawatte.

At the mean time, the largest private-sector-owned modern trade retailer, Cargills opened over 30 outlets across the country.

Glomark last month (April) opened its 10th supermarket at Cr&FC in Colombo with plans to add over 100,000 sq, ft., retail space by opening six other stores this year in the bustling suburbs around Colombo.

SPAR Brand in Sri Lanka, a joint venture with the SPAR Group Ltd South Africa and Ceylon Biscuits Limited (CBL Group) plans to open five more stores in near future, increasing its footprint to 11 stores. It has set an ambitious target to have 50 SPAR stores in the country by 2023.

Cargills-supermarket chain was by far the largest private-sector chain with 453 outlets spread across all districts of the country, followed by Keells with 123 outlets, Arpico, Laugfs, Glomark, and SPAR by-end March.

Despite the intensifying competition, JKH said that the the industry operating in a very challenging environment catering to a market that has been increasingly becoming price-consciousness.

Adding to that, sharp increases in the cost of imported input materials as a result of current imports in place and high food inflation are also having a direct impact on consumer affordability.

Sri Lanka’s household consumption expenditure declined by 3 percent in 2020 when compared to 2019.

The country had one modern trade outlet for a population of 30,000. However, nearly all supermarket chains except for Cargills and State-owned Sathosa didn’t have a widespread presence. Most were catering to cities and growing suburbs in the western province and few other key cities and tourist centers.

Since last year, all players were compelled to up their online delivery capabilities by investing in IT infrastructure and logistic capabilities to serve consumers who got restrained in their homes due to travel restrictions imposed to control COVID-19 outbreaks.JKH invested Rs. 1,408 million in digital infrastructure in last FY after their online delivery portal crashed during the first COVID wave last year.

In addition, some players have also upped their focus on their own products under private label to serve price conscous customer and to maintain their margins.

Glomark annouced that it plans to launch our own private label range, adding another 60-100 lines makes Glomark a strong challenger for growth in the competitive modern trade segment.

Cargills is in the process of rolling out a new initiative to introduce several pre-prepared meal product and rice
products (biryani, fried rice, and rice & curry) to be sold at our modern trade outlets at affordable prices
to the consumer.

JKH is in the process of strengthening and expanding its supply chain by getting new suppliers on board and investing in new tech-based facilities and solutions.

Meantime, with an aim to create an enbaling envioment for SMEs to complete, SPAR Supermakets said its focusing on fair trade practices.

“The food retail environment is made up of formal trade (15%) and informal trade (85%), with many small traders trading
on their own and with no real structure and support. While all the stores are currently corporately owned, our mission is to grow independent retailers enabling them to trade effectively and profitably against the bigger competitors,” it said.