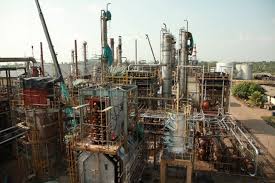 The Cabinet of Ministers recently approved a proposal to conduct a feasibility study to expand the capacity of Sapugaskanda oil refinery which is owned by the Ceylon Petroleum Corporation.

The existing refinery at Sapugaskanda refining 40000 barrels of crude oil per day (bblspd) meets only 25% of the country’s demand. The government has been importing the remaining 75% of refined oil requirement, at a higher cost adding pressure on the country’s limited foreign exchange reserves. With the proposed expansion,  the government is expecting to increase the capacity from  current40000 bblspd to 100000 bblspd in its efforts to fulfill the local petroleum demand.

The proposal for the new refinery was presented to the cabinet by the Minister of Power, Dallas Allahapperuma. The proposal sought the approval of the Cabinet of Ministers to conduct a new feasibility study to determine the scope, technical, operational and financial feasibility of the project.

A feasibility study had been conducted in 2010 to expand the refinery. However, subsequent technology changes have made it impossible to proceed with the project as the results were outdated. As per earlier studies, the cost of the expansion was estimated at $2 billion.