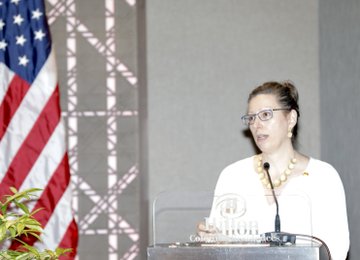 The United States (U.S.) expressed its strong commitment to promote and expand private sector investments aimed at employment creation in Indo-Pacific Region including in Sri Lanka as an alternative to state-dominated financing that impinges on national sovereignty and local autonomy, saddling saddles economies with debilitating debt coupled with corrupt practices.

“Secretary Pompeo highlighted during his visit to Colombo that every country will need the power of private industry to regain its economic footing after this pandemic.  The United States looks forward to working with our partners to achieve a post-pandemic recovery.

Already U.S. foreign direct investment in the region is substantial.  It has more than doubled in the past decade reaching close to a trillion dollars.  American investment creates jobs and not debt, with U.S. investment supporting over five million jobs in the region,” the U.S. Ambassador to Sri Lanka and the Maldives, Alaina B. Teplitz said.

She was speaking at a conference organized by the Pathfinder Foundation on the theme of Indian Ocean Security.

She stressed that American companies are transparent, reliable while they’re also accountable to the law including the U.S. Foreign Corrupt Practices Act.

She pointed out that sustainable economic development is ultimately strongly rooted in good governance and assured the U.S. support for citizen-responsive governance and light tough regulation that fosters entrepreneurship and the efficient allocation of capital.

“To be sustainable, economies must be open, transparent, and rules-based.  Infrastructure must not just be built but also maintained.  Public contracts should be transparent to high standards and ensure high-quality projects that last — a goal established by the G20.  Anything fewer risks corruption and poor construction as corners are cut,” she went on to say.

The infrastructure investment requirement in Developing countries in the Indo-Pacific is estimated at a minimum of $ 1.7 trillion per annum.

“The United States has a goal to help steer more of this capital to the Indo-Pacific region and to ensure the funds go to sustainable projects that bring a genuine return on investment,” Teplitz said.