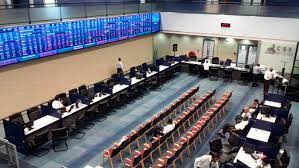 (Bloomberg) : The boom in Sri Lanka’s stocks has turned to bust as a 33% slide renders the market the world’s worst performer this year after Russian equities.

The slide in Sri Lankan shares is leading the reversal in a broader gauge of Asia’s frontier-market equities after it rallied in 2021. The MSCI Frontier Asia Index has just capped its worst quarter in two years as quickening price pressures and political tumult weigh on sentiment toward these relatively illiquid markets, including Pakistan.

Sentiment has soured even as the government seeks a bailout from the International Monetary Fund to tackle surging in living costs and a foreign-exchange crisis. The rupee is the world’s worst-performing currency this year with foreign funds withdrawing a net $11 million from local stocks, according to data compiled by Bloomberg.

Some investors see the authorities taking action to arrest the slide.

“I would not be surprised by a steep hike in interest rates above 100 basis points” at the Central Bank of Sri Lanka’s next meeting, said Ruchir Desai, fund manager at Asia Frontier Capital Ltd.