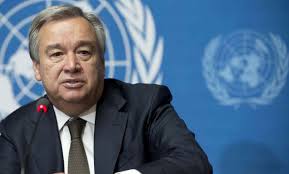 UN Secretary-General Antonio Guterres wants Sri Lankans to find a solution through dialogue to the crisis in their country, whose Prime Minister Mahinda Rajapaksa resigned amid violent clashes spurred by an economic crisis, his Deputy Spokesperson Farhan Haq said on Monday.

“We continue to encourage all Sri Lankan stakeholders to find a solution to the current challenges through dialogue and with the interests of the country and the people in mind,” Haq said.

Mahinda Rajapaksa turned in his resignation to his brother, President Gotabaya Rajapaksa, as the nation was rocked by clashes between the supporters of the Rajapaksa family and its opponents, and by police, attempts to contain the protests.

“We’ve also been concerned about the recent violence against peaceful protesters, and we urge calm and restraint, as well as respect for democratic rights, including the right… the freedom of expression and the right to peaceful assembly,” Haq said.

A member of parliament from the ruling party, Amarakeerthi Athukorala, was found dead after he fired into a crowd of protesters blocking his way and fled the place.

About 200 people were reported injured in the clashes around the country, including in front of the President’s residence.

It has sought financial arrangements with India and Bangladesh to import vital food supplies and oil to make up for shortages that have fuelled the protests.