Economic crisis in Sri Lanka and its impact on older adults 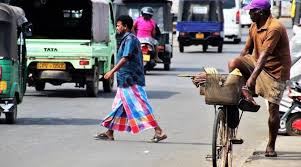 Sri Lanka is experiencing its worst economic downturn in history. Due to depleting foreign reserves, the country is facing shortages in fuel, food, cooking gas, medicines, and other essential items, as well as high inflation rates. A combination of years of financial mismanagement, poor economic decisions (i.e., tax cuts, abrupt ban on chemical fertiliser imports), Easter Sunday attack in 2019, the COVID-19 pandemic, both of which negatively affected one of Sri Lanka’s major revenues, the tourism industry, and corruption have all been associated with the current economic crisis. The Russia-Ukraine war has exacerbated the situation for Sri Lanka. Approximately 18% of Sri Lanka’s black tea is imported by Russia and Ukraine. Additionally, the two countries import 45% of the island’s wheat. This year, nearly 30% of tourists came from Russia, Ukraine, Poland, and Belarus, which has been threatened by the war. Many power plants were affected due to the shortage of fuel as well as lack of rain in the country, leading to a power crisis. In March 2022, Sri Lanka announced power cuts that would last 10 to 15 hours a day. As the country plunged into darkness, people took to the streets.

The current economic crisis has put all communities in Sri Lanka at risk, especially the most disadvantaged such as older adults. Older adults are often physically, psychologically, socially, and economically vulnerable due to multiple reasons such as advanced age, deteriorating health, limited social networks, and poverty. Sri Lanka’s older population is defined as people who are 60 years or older. In 2017, over 14% of Sri Lanka’s population was 60 years or older. In 2041, the present figure is predicted to reach 24.8%.

Lack of fuel and cooking gas

While Sri Lanka has been facing shortages in fuel and cooking gas, people have been forced to wait in long lines for hours in the sweltering heat to purchase these items. While most people find waiting in lines for hours to be exceedingly onerous, older adults may find it much more difficult due to frailty and existing health conditions. So far, there have been reports of deaths of at least four older adults, aged 70, 71, 72, and 76, who collapsed while waiting in fuel and kerosene queues. While not all causes of death have been reported, some deaths have been suspected of heart attacks.

Concerningly, Sri Lanka is running out of pharmaceutical and medical supplies as the country’s economic crisis intensifies. Over 85% of the country’s medical supplies are imported, but since the country’s foreign reserves are low, obtaining these supplies is becoming more difficult. Anaesthetics, implants, suture materials, IV fluids, antibiotics, anti-depressants, vital drugs for blood pressure, strokes, heart attacks, and simple pharmaceuticals like paracetamol are all reported to be in short supply, which may have detrimental effects on older adults with chronic conditions and comorbidities. Patients are in discomfort due to a lack of pain relief medications (i.e., morphine and anesthetics) and physicians are concerned about having to perform surgery without pain medication. Physicians further fear of having to halt most surgeries in the next couple of weeks, perform only emergency and elective treatments, stop treating cancer patients at some point, and their ability to save half the patients admitted to the ICUs, if the drug shortage continues. Furthermore, physicians have been forced to reuse medical equipment like catheters, which can increase the risk of infection among compromised older patients. One physician told CNN, “I know I am endangering the next patient’s life. I feel hopeless and utterly helpless. This goes against everything we have been taught to do”.

There have been reports of older adults’ inability to keep drugs at specific temperatures (in refrigerators) amid power outages, which can compromise medications’ safety and efficacy. The outages have posed the same challenge in pharmacies, that have been unable to operate generators efficiently due to inadequate fuel. While hospitals have been mostly spared from power disruptions, some have had outages during surgery and have had to rely on lanterns and flash lights from phones until generators were restored. Due to diesel shortages, it has become more difficult to secure an ambulance in state-run clinics, where serious cases must be transported to larger hospitals.

While these challenges in healthcare can affect every patient’s life, they might have particularly detrimental effects on older adults due to the complexity in care and their vulnerabilities (i.e., comorbidities). Almost 93% of the older population relies on the primary health care system in the country. Non-communicable diseases (NCDs) such as heart disease, stroke, cancer, diabetes, hypertension, and chronic lung disease, which are prevalent among older adults, cause over 80% of deaths in Sri Lanka. The hardships that older adults may encounter as a result of such obstacles in the health care system are quite concerning.

Health professionals anticipate a health disaster if foreign assistance does not arrive quickly, and they are pleading for international humanitarian assistance. A list of items that are desperately needed in healthcare, which has been published by the Government Medical Officers’ Association (GMOA) can be found here.

The economic crisis in Sri Lanka has also resulted in a food shortage, forcing people to pay significantly more for staples such as rice, sugar, lentils, and milk powder and to buy in limited quantities, which can have direct impacts on older adults with limited incomes. While vegetables are abundant, due to fuel shortages, transport costs have led to increases in prices, worsening the food shortage crisis for older adults living away from villages, where many depend on home grown food sources.

Tragically, one person died and several others were injured in a clash between protestors and police on April 19th, 2022. Older adults who are also part of the protests are at a larger risk of being injured from such encounters. While the ages of those injured have not been stated, in a video posted on the social media page of Daily Mirror Sri Lanka, which is a leading newspaper in the country, one older adult can be seen holding his bleeding head (viewer discretion is advised).

While the abovementioned circumstances can be debilitating for most human beings, Sri Lanka’s older adults are likely more anxious about the current situation due to their age, health, limited income, social networks, and reliance on others (also the opinion of a physician, Ash Goonasekera, from Sri Lanka). I believe that a person should always be loved, but old age is when a person should be most loved. It is imperative that Sri Lanka takes immediate actions to protect its older population.

What can be done to help older adults in Sri Lanka?

There is a clear gap in the understanding of the ways in which older adults are affected and dealing with the crisis, which is one of the reasons why this piece is primarily reliant on news articles, which the author has no means of verifying. It should be noted that there seems to be minimal discussions on the impact of the crisis on older adults on reliable platforms. I appeal to organizations such as HelpAge International, HelpAge Sri Lanka to investigate what the crisis means for older adults and how they are coping. Further, I request researchers in Gerontology from Sri Lanka to explore and document the effects of the current crisis on the aging population and report findings on scientific platforms so that the rest of the world can be informed and provide support based on more reliable information.

While Hartwig Schafer, the Vice President of the World Bank for South Asia, voiced worry for Sri Lanka’s vulnerable, he also emphasized that the World Bank is prepared to provide Sri Lanka with emergency support. Kristalina Georgieva, the Managing Director of International Monetary Fund (IMF), emphasized that nations receiving IMF assistance should consider targeted assistance, which includes having social protection that identifies the most disadvantaged individuals that require help. A country must have a social safety net; they must know who the country’s most vulnerable are to provide targeted support. She further adds, “Target your public spending. For God’s sake, don’t throw good money in the direction of rich people.” Sri Lanka’s team is currently in discussions with the IMF. In combination with other approaches, targeted assistance may be one way to help older adults in the country.

Finally, in times of crisis, empathy can go a long way. On public transit in Sri Lanka, one will most likely see a young individual offering their seat to an older adult. Is it possible to apply the same rationale in a crisis? Would one be willing to let an older adult take their place in the line or help them with lifting the fuel/gas containers? I’m positive people would, but perhaps it is wise to establish a better system along with targeted assistance to provide essential items to older adults without endangering their lives. For example, consider a government or NGO-run youth volunteer program that delivers essentials to older adults in the community. If older adults must wait in line, designating separate lines in the shade with benches for them to sit, or assigning distinct timeslots for older adults when the sun’s heat is at its lowest, can help alleviate the suffering they are now enduring. Simple adjustments can make a big difference; even save a life.

I would like to leave with a question for the readers and especially those from Sri Lanka; what is the message or appeal that you would like to convey to those listening in order to assist older adults in Sri Lanka