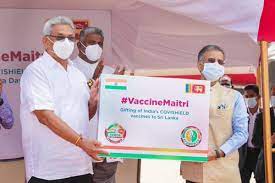 Depending on the scale of production of vaccines, India is aiming to meet vaccine orders placed by Sri Lanka and other South Asian neighbors by July-end or August, The Print reported.

India, the largest vaccine producer in the world, started sending Covid shots abroad, both as grants as well as commercial shipments, from 20 January onwards under an initiative labeled ‘Vaccine Maitri’. However, as India started facing a vaccine shortage domestically, Vaccine Maitri came to a halt in April. India had shipped over 66 million doses abroad by then.

Sri Lanka was struggling to source second vacccine jab for citizens who received the first jab.

With the Indian initiative suspended, China, and Russia, have stepped in to offer their Covid shots to countries in South Asia.  India remains concerned about growing Chinese influence in the region.

After initial hiccups in the domestic Covid vaccination drive caused by shortages, India has launched a policy under which the central government will be the sole public sector vaccine buyer in the country. On the first day of its rollout Monday, over 8 million people were vaccinated against Covid-19.

The boost in numbers has encouraged the Indian government to begin planning for the release of the pending Covid vaccines in the neighborhood.

According to the sources, the Narendra Modi government believes that if India can maintain the record number of Covid-19 vaccinations, it would reach a position by August where shipments to other countries can be resumed.

“If the number of vaccinations that we saw on Monday continues, then the government expects that 40 percent of the population can be covered by August and we will have a situation when herd immunity will kick in,” said a source. “There are high chances that is when we can safely resume the shipments. It won’t be like before so soon but, of course, for the neighborhood, we are responsible.”

However, the sources also said that, if and when the exports are resumed, it will only be for the neighborhood since they are of “topmost priority”, and because some of them have also made payments to procure vaccines from India.

Besides this, sources said, while other countries will get support from the US and other nations, it is the immediate neighborhood that needs India’s attention. The vaccine distribution announced by the US is expected to address concerns of the Caribbean and African countries. They added that India believes it is time Europe stops “cornering” the vaccines and begins distribution in a significant way.